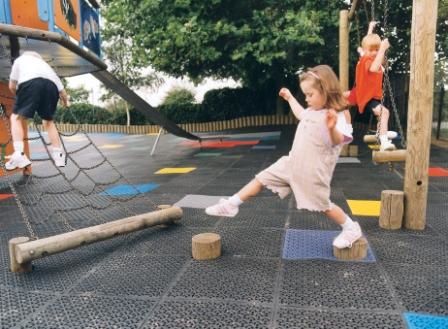 Spatial awareness is the ability to be aware of oneself in space. It is an organised knowledge of objects in relation to oneself in that given space. Spatial awareness also involves understanding the relationship of these objects when there is a change of position. It can therefore be said that the awareness of spatial relationships is the ability to see and understand two or more objects in relation to each other and to oneself. This is a complex cognitive skill that children need to develop at an early age. Spatial awareness does come naturally to most children but some children have difficulties with this skill and there are things that can be done to help improve spatial awareness.

When a child is developing their spatial awareness they begin to become aware of their placement in relation to the things around them. They are central to this, and they need to understand their location as well as concepts like distance, speed and placement (over, under, behind etc.). Spatial awareness is part of our overall perception. The development of perception can be difficult for children with developmental co-ordination disorder (DCD), autism, cerebral palsy and many other conditions. As perception is the organisation and interpretation of sensory stimuli from our environment, the child would need to have adequate body awareness to be able to form the relationship of their body with the the stimuli and objects within that space. This is key to developing spatial awareness. Proprioception is the awareness of where our limbs are in space. This is developed alongside spatial awareness. For example, when a baby reaches for a toy it learns how far it needs to stretch the muscles in it's arms (proprioception) in order to reach the distance of the toy (spatial awareness). The next time the baby reaches for that toy it would have learnt something about the amount of muscle stretch needed and the distance of the toy. This can then be applied to a similar object at a similar distance another time. The child will eventually become familiar with where its limbs are without having to look at them. Distances, speed and placement will be integrated so that the child will know what they can reach and can't reach when they stretch their arm. As spatial awareness develops the child will learn the concepts of direction, distance and location. They will understand that when they walk to an object the object will become closer to their body. they will know that objects that are far away appear smaller because of the distance. They begin to appreciate the space around themselves and the proximity of others around them. As they grow older their movements become more controlled and constrained around others as they are more aware of their personal space.

Children with poor spatial awareness tend to have visual perceptual difficulties as well. They may appear clumsy and may bump into others. They often stand too close or too far away from the people or objects that they are interacting with. In the classroom they may have difficulty with presentation of written work and may find it hard to structure and organise such work. These children often find it hard to tell their left from right and they confuse positional language i.e. over, under, in or out, left or right. This makes it hard for them to follow directions that use such language. They may have difficulty with PE, team games and games that use apparatus.

In the classroom the child with spatial awareness difficulties often finds mathematics hard. This is due to the abstract concepts of the subject especially where shapes, areas, volume and space is involved. They will have problems reproducing patterns, sequences and shapes. Their strengths, however, are with the more practical and concrete subjects. These children will often find that they excel at using a multisensory way of learning. They tend to have good auditory memory skills and have strength in speaking confidently whilst being able to listen well. They tend to have good verbal comprehension skills and their strength is usually in verbal and non verbal reasoning. In order to be able to relate ourselves to objects in a given space, we need to have an accurate body schema. This is a sense of where your body is in space and where it is in relation to the whole of you. For example we need to know the exact location of our arms in relation to our trunk. The body schema develops through our muscles and touch receptors (proprioception and tactile senses combined with other senses). This gives us a map or image of the way we perceive ourselves to look and is linked with our body awareness. Asking a child to draw a picture of a person will give a trained therapist a very good indication of the child's body schema and it will provide the therapist with information on the child's spatial awareness. The therapist can also detect spatial awareness difficulties in a child's handwriting. A child with poor spatial awareness may leave out the spaces between words, start the sentence in the middle of the page, have difficulty keeping on the line or write diagonally instead of horizontally. These are visual perception problems that are related to spatial awareness.

An occupational therapist will also be able to identify a child with spatial awareness difficulties when observing their gross motor skills. The difficulties may be seen during team sports such as football where the child needs to judge distance and speed of a ball coming towards them, as well as the distance between themselves and the person they need to kick the ball to. They may also appear clumsy, move into spaces that they are not meant to be in during the game and often bump into team members.

Spatial awareness develops naturally when children have the ability to freely explore their environment. Babies learn about themselves and how they relate to their surroundings naturally. They learn to manipulate objects as they become mobile and learn about distances and sizes when they are able to move towards the objects. There are, however, situations that interfere with or prevent the natural development of spatial awareness. The child may have some developmental difficulty or a disability that results in poor spatial awareness. In other circumstances there may have been a lack of opportunity for the child to freely explore the environment during it's early developmental stages. The child may have been ill at key developmental points or may have missed opportunities for other reasons. Occupational therapists work closely with parents and schools to provide suitable remedial exercises for a particular child with spatial awareness difficulties. The activities may involve games that work on judging distance and placement such as throwing beanbags into hoops, buckets or over lines (target games). They may use obstacle courses to involve the body and help the child to be aware of where they place their limbs in relation to the obstacles. Music and movement helps with placement, co-ordination and use of space. Games such as bowls or marbles help the child to develop a judgement of space.

At home parents can help to develop spatial awareness in the following manner:

If a parent is concerned about their child's spatial awareness they should seek advice from their child's GP, school or health care professional. Nice article, Thanks for posting such a nice article.